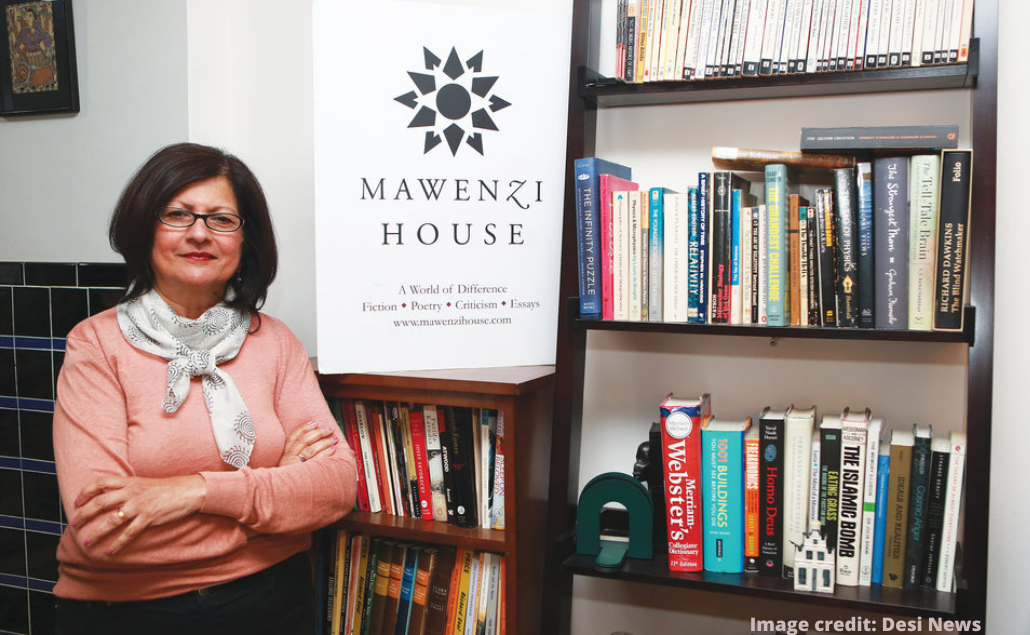 The Publisher’s Speech on Receiving Ivy Award November 4, 2020 – Posted in: From the Publisher – Tags: Awards

The following speech was read by Mawenzi House publisher Nurjehan Aziz upon being presented with the Ivy Award at the 2020 Toronto International Festival of Authors.

Thank you, The Toronto International Festival of Authors, the International Visitors Programme Committee, and the Ivy Award jury for honouring me with the Ivy Award this year. To say that I was blown away when I was informed of the award would be an understatement. Over the days since then the enormity of the recognition has hit home. A small press is suddenly picked for this prestigious publishing award.

This award recognizes the importance of small presses in Canada, and in my case, acknowledges the role Mawenzi House has played in introducing diverse, new voices to Canadian literature. It has been doing this–you may find it hard to believe–continuously, for 39 years. The award also very obviously recognizes the authors whom we have published, acknowledging that they and their works matter in defining an evolving Canada.

Now, you may wonder, what is Mawenzi House?

Mawenzi House had its beginnings in 1981, when we—a small group of friends from East Africa, fresh from college and newly arrived in Canada–founded a literary magazine. It was called The Toronto South Asian Review and very soon became the Toronto Review of Contemporary Writing. We had come with a burning question from our colonial upbringing: Why don’t we find works that reflect our lives—that describe people like us, the places we come from, the streets we grew up in? It soon became apparent that there were already writers from Asia, Africa, and the Caribbean writing in Canada and seeking desperately to get published. There was no serious venue to understand them, welcome them, promote them. And so somewhat naively we started our literary magazine; we were told by many that the effort was doomed, condescending smiles greeted us. It lasted 20 years, 60 issues or 6000 pages of new Canadian literature.

Book publishing began in 1985 under the acronym TSAR, which transitioned into Mawenzi House Publishers, keeping the same vision. Mawenzi, incidentally, is the second peak of Kilimanjaro.

Our mission has been to promote literature that reflects the cultural diversity of Canada. We aim, specifically, to encourage the production and promotion of the literary arts in all forms that reflect non-Western experiences, cultural values, traditions, and histories. By non-Western we mean South and East Asian, Near and Middle Eastern, African, and Caribbean.

Historically, Canada has seen itself as Western, its literature tracing its roots to “the Great Tradition” of Europe. Today most Canadians accept that cultures from other regions of the globe, as they exist and evolve in Canada, are a constituent part of the nation. In our vision, this recognition should go beyond the acceptance of foods, so-called “ethnic” neighbourhoods, and the noise of many languages in the downtown streets. It should be seen not as the exotic “Other,” or to be patronized, confined to the literal or metaphorical suburbs, and used as a political point. Rather, it should be part of the new Canadian mainstream representing this nation.

From the beginning we were aware that there was so much literary activity going on away from the mainstream that it could not be ignored for long. Recently we have been emboldened to broaden our vision to embrace Indigenous literature, recognizing that recent Indigenous history has been colonial and Indigenous culture has been marginal in ways that Canadians from former European colonies can readily identify with. We have not shied either from giving exposure to the primary languages of creation other than English.

Canada is special because of its people, and not all good writing comes from Britain and the United States. To bring out the special, we need to pay attention to its details. And so we have brought to the service of our authors an empathy for difference and a knowledge about different cultures, languages, traditions, and histories.

It has not been easy. We were often told we were unique in North America, yet it seemed as if the mainstream needed special glasses to see us. I will not bore you with details; it has not been easy but it has been satisfying, publishing writers with roots in places ranging from Somalia to Guyana, Calcutta to Karachi to Sri Lanka, Manchuria to northern Quebec, Beijing to Nairobi.

Thankfully we live in a country that has been willing to change, allowing others to assimilate into its culture, thereby assimilating its own culture to the cultures of peoples who arrive here. This is a different country from the one we came to.

Now for some thanks:

Small press publishing in Canada would not be possible without the ongoing support of the arts councils, and we at Mawenzi House are deeply grateful especially to the Canada Council for the Arts for its financial support and its understanding of our mission; we are also grateful to the Ontario Arts Council, and the governments of Canada and Ontario. I would like to thank the Literary Press Group of Canada for its undying efforts at selling, the University of Toronto Press Distribution, and Coach House Printing, for their patience over the more than 35 years we have been with them.

Thank you to the many, many writers who have put their trust in us and told us their stories.

I’d like to acknowledge the many friends and colleagues in Canadian publishing whom I have called upon for advice as I have navigated my way through my career with books.

I have been fortunate to have excellent staff throughout, currently Sabrina Pignataro and Maria Zuppardi.

And finally, Mawenzi would not have lifted off or stayed afloat without the inspiration and driving force, in other words, the madness, of my partner and co-director MG Vassanji.

« Re-Ignite Your Purpose: Conversations with Munira, Part 1 – Self Awareness: Re-connecting With Your Values
Reflections on Keepers of the Faith by Sumaiya Hamdani »

Congratulations to Nurjehan and M.G. for their vision and for their belief in writers of diverse backgrounds.
Canada is richer for their dedication and years of hard work to foster writers who have settled in Canada.
Canada can lay claim to so many remarkable writers because of their labours of love.
alia Hogben.

Reply to ArticlePlease do not use offensive vocabulary.

Due to health and safety concerns and the recommendations from public health officials, many of our authors’ upcoming events have been cancelled or postponed. Please be sure to join our mailing list for the most up to date information and learn about our upcoming virtual events!