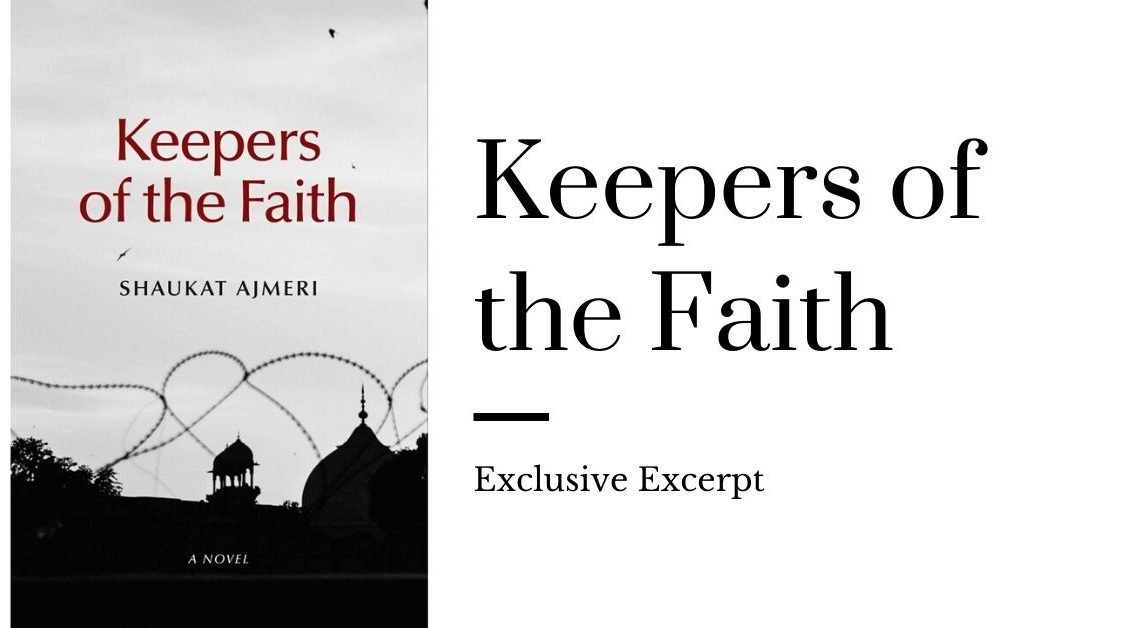 Keepers of the Faith is set within a small Muslim sect of India, ruled by an avaricious priesthood that demands absolute submission while enforcing archaic social customs. When a section of the community rebels, it is summarily excommunicated, shunned by friends and family and denied religious rites. The peaceful community is split into two.

The novel follows the fates of two blissful young lovers, Akbar and Rukhsana, in the historic city of Udaipur. When the communal split occurs, their families are on opposite sides; the lovers’ dream of a happy life together is shattered, and they are forced into separate destinies. Akbar, from the rebel group, goes on to become a writer and family man in Mumbai, while Rukhsana gets married to an immigrant engineer from the United States fanatically devoted to the priesthood.

Years later, Akbar’s and Rukhsana’s paths cross again. Much has changed and much has not, and they are presented with soul-destroying choices about the rest of their lives. Learn more here.

When exactly Rukhsana tiptoed into his heart, Akbar could never tell. But when the first consciousness about girls dawned upon him, she was already there, nourishing his honeyed dreams. He was a lanky boy of twelve, with a shock of thick black hair and a face that did not invite a second look. He was by no means handsome, but had a disarming vulnerability about him that held a certain charm. Socially awkward and always unsure of himself, he spent most of his time alone. He would often climb up to the “tower top” of his family’s home to steal a glimpse of Rukhsana. To show off. To let her know of his love for her, of which she did not have a hint and perhaps would not even care if she knew. He could see her balcony down the road from his vantage position and would wait for her to emerge there. Often she never came. But there was always tomorrow. He had learned to live in hope, a young hope unsullied by a corrupting world.

It started to drizzle. How he loved the scent of the first rain—the hot, thirsty earth emitting a damp sigh of relief. Monsoon came to Udaipur reluctantly, as if obliged to pay a visit to a poor country cousin. And when it did come, it usually arrived late, in July or sometimes even August, having already showered its bounty elsewhere. It sprinkled this beautiful southern nook of Rajasthan with the remainder of its wares. People had learned not to expect much of the miserly monsoon; they were happy as long as Fateh Sagar Lake filled up. The level of water in the lake seemed to mark the quotient of happiness of the people.

That year the water level in the lake had hit rock bottom. All of summer, the westerly wind bore the arid feel of the Thaar desert up north. The sun unleashed its fire without respite. Even a whiff of cloud in the sky would get the hopes of the city soaring. Humans and cows and dogs huddled together in every slice of shade they could find, seeking refuge from the merciless sun. Fans and coolers were ineffective inside stone and brick houses. Just a couple of hours into the morning, the city’s homes would begin to feel like furnaces. Hibiscus and dandelions and other flora that spring had coaxed out of the ground wilted; green grass was scorched into straw; only neem and peepal and the native khejri had any chance of surviving the summer.

The “tower top” that Akbar had clambered up to was the topmost terrace of their house. Of the six storeys, the bottom three floors of the building were the living quarters, open in the middle to let air and light through. The top three were terraced rooftops, each smaller than the one below. His grandfather had overseen the construction of the building and lavished attention and money on it to make it the best and the tallest in the neighbourhood. The “tower top” was small, no more than six feet by four. A low one-foot barrier of cement grille ran around it; not much of a protection. This adjunct had no obvious purpose, and was almost inaccessible as it had no stairs. One could only reach it from the terrace below by jumping and catching hold of its plinth, hanging by the fingers and vaulting oneself up with brute muscle power.

The light rain petered off and the clouds were driven away by a sudden wind. The sun had begun to hide behind Sajjan Garh, the Monsoon Palace that stood up on a hill in the distance. Akbar moved to the edge of the railing to look down. A crow flew overhead, shrieking. If I were to fall down, that would be the end. He stepped back and turned his gaze to the balcony at the other end of the street, with its parrot-green doors. She was not there, but her mother sat there as usual, knitting and keeping an eye on the goings-on in the street below.

From the street, the first-floor balcony didn’t seem far. Most evenings Rukhsana would spend her time there. He would pass her house on his bicycle a number of times, even when he had no errand to run in that direction, taking the longer route just for an off chance that he’d be noticed. He could never gather the nerve to look up towards her balcony, but he hoped she would see him. He increased his odds by making as many trips as he could. If not Rukhsana, at least her mother Zubaida’s eagle-eye would catch him. Zubaida Auntie was a friend of his mother’s, and their families met often.

Earlier that evening he had been flying his kite from the middle terrace, but in a battle with other kites, his was cut loose. He was disappointed by the loss. On top of that, his forefinger had been lacerated by the sharp kite string. In the morning he had given a red abrasive coating to the string and laced it with glass powder, a ritual every authentic kite-lover performed in order to ace it in the battle of the skies. His string had not been good enough, after all. And he had used all his pocket money of the past three weeks for the materials. His family was well-off, but his daily allowance was limited to a quarter rupee, which didn’t go far. His father, Zahid Ali, was frugal and wanted his only son to appreciate the value of money.

Akbar sat down at the edge of the tower top, looking down at the terrace below, dejected, his legs hanging down. The floor, baked by the sun all day, felt warm under him. As he thought of his lost kite, wondering where it might have landed, he saw a sudden movement in the distance. He looked towards it. It was Rukhsana at her balcony. Excited, he almost waved at her. She was looking out on to the street apparently talking to someone. Even from this distance he could make out her smile, the contours of her face, the flushed cheeks. He imagined the impish glint in her eyes. She wore a pale-yellow dress, sleeveless, her arms resting on the balustrade. A mauve ribbon held her shoulder-length hair into a jaunty ponytail. He could have sworn she saw him when she turned to go inside.