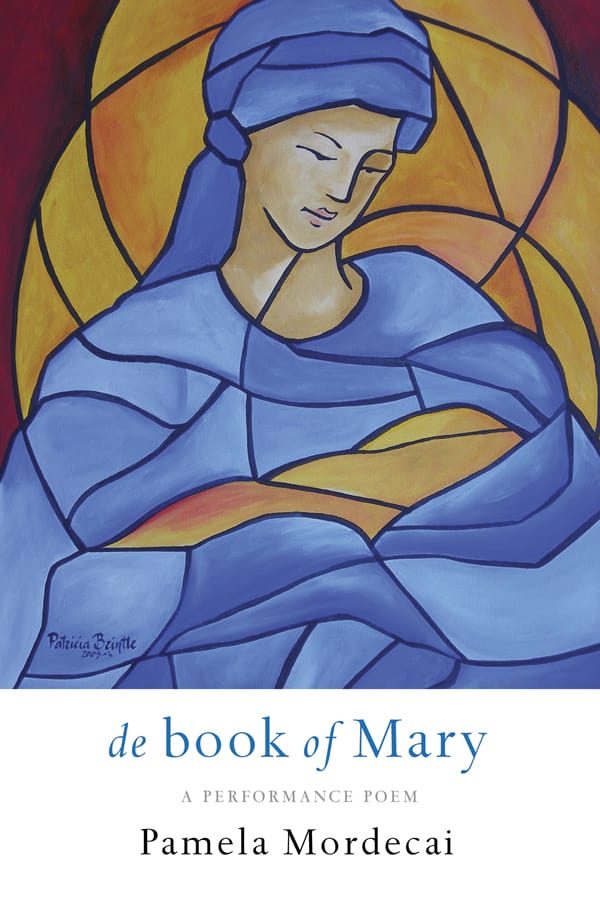 de book of Mary is an epic poem in Jamaican Creole based on the Biblical story of Mary, Joseph and Jesus. The first book of a trilogy, Pamela Mordecai’s de book of Mary covers Mary’s life from her early years, through the arrival of the Archangel Gabriel and the birth of Yeshua, to her death. A Chorus of male and female voices provides an accompanying commentary. This exciting Canadian Jamaican retelling, profound and tragic, yet told with humour and gusto, is a major event, continuing Mordecai’s project of hybridizing one of the most significant cultural-religious phenomena in world history. The last book of the trilogy, de Man, about the crucifixion of Jesus, was published by Sister Vision Press in 1995 and is now out of print. The poet is currently working on de book of Joseph, second book of the trilogy.

“Mordecai’s verses hew to gospel truths but also respect both the poet’s Jewish heritage of scepticism and her roots in Jamaica’s Afro-spiritual-accented and ganja-scented Christianity.”
–George Elliot Clarke, The Chronicle Herald

“de Book of Mary is both a salute to [Jamaica’s] colourful patois that [the poet] so loves and a fresh spin on age-old, Bible-based lore.”
–Tallawah Magazine

“[T]his is an imaginative take on a familiar story.”
—Herizons

“Mordecai re(claims) and re-centres the story of Maiden Mary, triumphantly transposing it from the word of men to the stories of women, and from High Church language to everyday speech. As did Derek Walcott before her, she performs the legacy of Caribbean creolization; a muscular hybrid which claims the right equally to the ancient forms of Greek theatre, the traditional practices of Judaism, and the beauty of Caribbean vernaculars and sensibilities. A lovely, chewy book.”
–Nalo Hopkinson, author of The Salt Roads

“de book of Mary has one awestruck. From her Brechtian opening, in suitably Dantesque tercets chock with lovely lines, Mordecai’s creolized English gives her tale a locale, a rhythm, and deeply felt characters to anchor its astonishing balance of the holy and the profane, the sacred and the quotidian.”
–Timothy J. Reiss, Professor Emeritus of Comparative Literature, New York University

“A rare and dazzling look at her world and ours by one of the most mysterious women of all time.”
–Rachel Manley, author of Drumblair: Memories of a Jamaican Childhood

“de book of Mary is a perfect example of how powerful, striking stories will always, in every place and era, find exactly the right person to re-tell them. The poet Pamela Mordecai has found a new way with the Good News–de book of Mary is a page-turner–pure energy released through pure poetry.“
—JonArno Lawson, author of Sidewalk Flowers